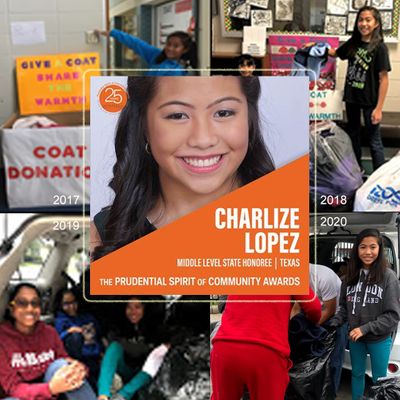 Charlize Lopez, a student in Fort Bend ISD, first attended a Lone Star Leadership Academy camp in the Dallas/Fort Worth area the summer after 4th grade. The following summers she returned to attend the Austin/San Antonio camp and the Houston/Galveston camp and earned the Trailblazer designation for her dedication to experiencing Texas while developing her leadership skills.

During Charlize's four years on the Alumni Council, she collected and distributed almost 1,000 coats and other cold-weather items to help the homeless, domestic violence victims, and those at a youth immigration detention center. Charlize was selected as the Prudential Spirit of Community Awards Middle Level Texas State Honoree for the Coat Drive service projects she completed as a member of the Alumni Council. As the Middle Level State Honoree, Charlize represented Texas in the national level awards ceremony in Washington, D.C. Charlize has also received the Presidential Service award two times. Now a 10th grader, Charlize aims to turn her project into a nonprofit organization to help more people in need.

Kudos to you, Charlize! We are proud of the work you are doing in your community and the well-deserved accolades you have received.

Outstanding 4th-8th graders learn about the opportunity to participate in Lone Star Leadership Academy summer camps when they are nominated by an educator based on demonstrated leadership and academic ability.